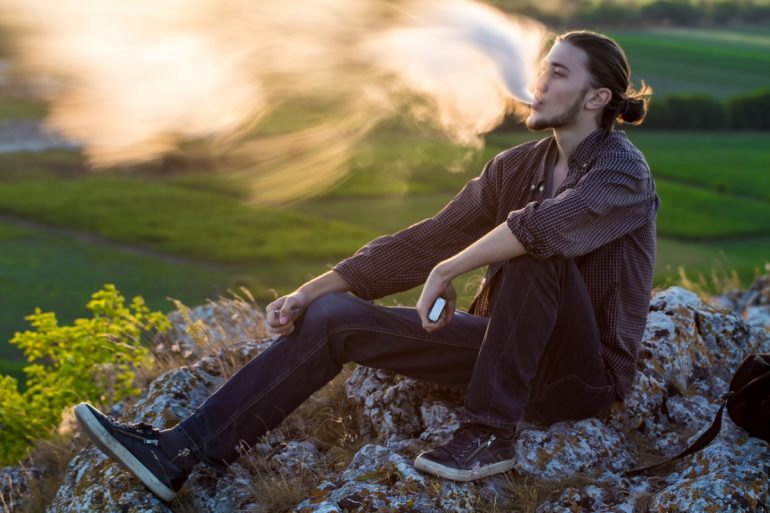 Although this isn’t breaking news, we are frequently asked about how to make CBD vape juice, thus leading us to publishing this article. While we discuss how to DIY your own vape juice with CBD isolate, we still strongly recommend instead purchasing “pre-made” E-Liquids from reliable shops.

This article assumes that you, the reader, are already somewhat familiar with CBD and with vaping, but if you are a “first timer” for both, then we strongly recommend first reading “Everything You Should Know About Dosages for Vaping CBD“.

As you probably know, vaping is the most efficient method, quickly spreading CBD throughout the whole body (not to mention vamping is convenient and easy for daily use). By inhaling CBD E-Liquids with a vaporizer, CBD enters your lungs and diffuses directly into your bloodstream rather than first entering your liver. As a result, nearly four times as much CBD enters your circulation. Essentially, this means you can achieve the same beneficial effects with a much smaller amount of CBD than if you were to take edibles, creams, etc.

However, Nordic Oil offers “pre-made” E-Liquids, which are not only a simpler option but, due to their “full-spectrum” of natural cannabinoids, they promise stronger effects. Again, this article is no new news as we refer to a study conducted back in 2015, but Nordic Oil’s line of e-liquids has recently expanded!

To Review: Benefits of Vaping CBD

As mentioned, CBD enters your lungs and diffuses directly into your bloodstream rather than first entering your liver. Thus, it rapidly supports your endocannabinoid system, which is involved in regulating pain, the immune system, sleep, appetite and much more. To review our Cannabidiol: The Ultimate Guide to CBD, it’s important to understand the relationship between the nervous system and the endocannabinoid system. The body produces endocannabinoids that bind to cannabinoid receptors in your nervous system. CB1 receptors are located in the nervous system (connective tissues, gonads, glands and organs) but there are also CB2 receptors in the immune system (spleen, heart, kidneys, bones, blood vessels, lymph cells, endocrine glands and reproductive organs), which is why scientists are, for instance, fascinated with the benefits of CBD for inhibiting the growth of tumors. (Researchers today suspect that there may even be a third cannabinoid receptor which has yet to be discovered!) In other words, the endocannabinoid system regulates many bodily functions. The peculiarity of the cannabinoid receptors is their location. To explain, your nervous system is built of transmitters and receptors, i.e. first and secondary cells. So, normally, receptors are located at the secondary cell to forward the signal on. However, oddly, the cannabinoid receptors are located on the former, i.e. the transmitter cell. This means that CBD is not directly responsible for the forwarding of the signal, but the transmitter cell retrograde, that is, returns information in a retrograde manner. Cannabinoids thus provide feedback to the transmitter cell. The messengers of the endocannabinoid system are therefore referred to as retrograde neurotransmitters or neuromodulators. So although CBD has little direct binding affinity for CB1 and CB2 receptors, it can influence the actual information transferred, also modulating several non-cannabinoid receptors and ion channels. Essentially, CBD works alongside the CB1 and CB2 receptors, supporting your whole endocannabinoid system, such as by enhancing or inhibiting the binding action of certain G-protein coupled receptors. For example, Jose Alexandre Crippa and his colleagues at the University of San Paulo in Brazil and King’s College in London have found that CBD directly activates the 5-HT1A (hydroxytryptamine) serotonin receptor, thereby conferring an anti-anxiety effect. Another example, CBD binds to TRPV1 receptors, which also function as ion channels, TRPV1 being known for mediating pain perception, inflammation and body temperature.

As compared to other means for in-taking CBD, vaping enables the interaction of CBD molecules with the CB receptors within record time and, as mentioned before, it is nearly four times stronger since it bypasses the liver.

The process of making your vaping juice with CBD isolate is fairly simple, so long as you can find a convenient supplier for CBD isolate (pure and crystalline form). Cannabidoil 360 has a very helpful breakdown for making CBD vape juice that, outside of the CBD isolate, further requires:

Their instructions demonstrate how to make a 15mL bottle with a 60/40 (VG/PG) ratio.

Regarding Step 5, determining the exact measurement of CBD Isolate Crystal… As mentioned in our Cannabidiol: The Ultimate Guide to CBD,

every person is different and everyone’s reaction to CBD is different. On an average, 25mg of CBD a day is effective for most people. The dosage of CBD can be increased slowly until the symptoms improve. And, again, since the effects of vaping CBD are four times stronger than any other means of intake, it is even more important that you start with modest dosages, such as 1% or 3% CBD content. To learn more, check out our article “Everything You Should Know About CBD Vape Dosage“.

If you’re feeling overwhelmed in making your own CBD E-liquid, we offer not only a much easier, faster solution but a healthier one. First of all, Nordic Oil offers three types of pre-made E-Liquids ranging from 16,95€–46,95€ depending on the CBD concentration: 1%, 3% and 5% CBD. (Unfortunately Cannabidoil 360 recommends Wellicy for buying CBD isolate, but they are based in Colorado, United States.) Second of all, Nordic Oil’s E-liquids contain the full-spectrum natural cannabinoids, which, as you will see from the next section, have much stronger benefits than CBD Isolate.

What is better? Making Vaping Juice from CBD Isolate or “pre-made” CBD E-Liquids?

Nordic Oil’s line of E-Liquids contain the full range of natural cannabinoids. They follow the normal extraction process of CBD: a gentle CO₂ extraction process where the valuable cannabinoids and terpenes of the hemp plant (cannabis sativa) are preserved, thus resulting in a full spectrum of natural cannabinoids. (Their certified hemp plants are organically grown and therefore GMO-free, meaning they are free of chemical fertilizers and growth hormones. In addition, they are gluten free and do not contain any artificial preservatives or dyes.)

As suggested, full spectrum CBD is not made in the same way as CBD Isolate. Cannabidoil 360 also has a very useful article titled “What is the Difference of Full Spectrum CBD and Isolate?” and explains their extraction process:

On the other hand, CBD Isolate is produced by separating CBD from other cannabis compounds found within the source plant such as the psychoactive cannabinoid THC.

The extraction process of Isolate is different than for Full Spectrum. Specifically, once the hemp oil is extracted from the whole plant, the oil is then cooled until crystals begin to form. The produced crystals are then processed into powder form. After processing, the isolate (powder) contains a molecular compound of nothing but CBD.

The CBD Isolate can then be used in varying forms of herbal treatment such as in an edible, topical, oil, or concentrate.

At first, it was thought that CBD isolates provided the most potency and concentration, but research has recently discovered the opposite to be true.

Researchers in 2015 found that full spectrum CBD offers higher levels of pain relief than that of CBD isolate. This is because CBD Isolate results in a “bell curve” of effectiveness.

Everything You Should Know About Dosages for Vaping CBD

Nordic Oil Launches New Line of Products: How Can CBD Benefit Your Pet?